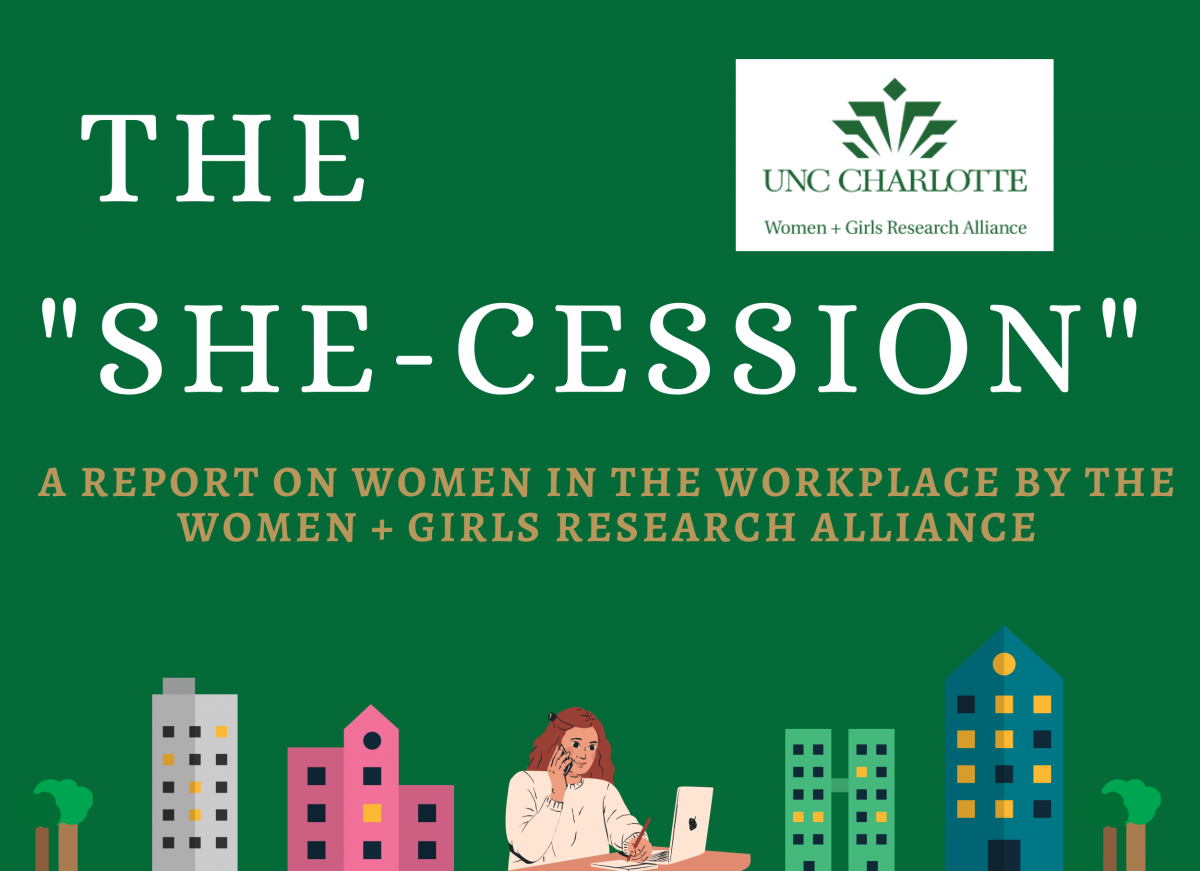 This summer, the Women + Girls Research Alliance funded the research project entitled, “Developing the “Paper Chase” Virtual Training Model for Research Dissemination.” This research project, which is led by Dr. Jessamyn Bowling and Dr. Alicia A. Dahl, focuses on “developing virtual training modules about the processes of science communication and research dissemination efforts, with an emphasis on gender equity, to be implemented with undergraduate students accepted into the Charlotte Research Scholars (CRS) and Charlotte Community Scholar (CCS) programs offered at UNC Charlotte.” By funding this project, the W+GRA is supporting research that aims to lessen the gender gap in women’s enrollment in STEM programs, research publications, and their future jobs in STEM fields. The “Paper Chase” project will provide efficient and effective dissemination training models for underrepresented students beginning with the undergraduate experience and continuing through research trajectories.

The Alliance has funded Dr. Alicia A. Dahl's research project “Pandemic & Peripartum: Understanding the Impact of the COVID-19 Pandemic on the Wellbeing of First-Time Moms in North Carolina.” Dr. Dahl's research focuses on the “increased stress associated with the risk of infection and the potential consequences for the mother, her child, and family as a result of the pandemic.” The goal is to understand the experiences of North Carolinian primiparous women who give birth and enter postpartum within the context of the COVID-19 pandemic. The importance of this work is to identify who is at greatest risk for adverse psychosocial outcomes during a pandemic as a way to inform best practices and policies for addressing the needs of women navigating the peripartum period during a public health crisis.

In May of 2021, the Women + Girls Research Alliance partnered with Keepin' It Reel: Black Girls Film Camp in their inaugural camp for high school students. The organization strives for the empowerment of girls through storytelling, teaching them a holistic approach to the process of the film industry. The executive director of the Women + Girls Research Alliance, Dr. Michelle Meggs, was one of the guest speakers for the camp. By the end of camp, students had created, filmed, and produced their own short films. Students also participated in an awards ceremony featuring Academy Award writers and producers. The recording of the full ceremony is listed below.
Video of the Screening and Awards Showcase 2021:
https://www.youtube.com/watch?v=nU528ClXSEQ
Charlotte Post Article about Black Girls Film Camp:
https://www.thecharlottepost.com/news/2021/05/17/arts-and-entertainment/black-girls-film-camp-inspires-participants-to-dream-in-cinema/

Prior sponsored research projects in our areas of focus:

Dr. Lan Kolano's Voices from the Margins: Intersections of Race, Language, Gender, and Culture in the Education Experiences of Southeast Asian Girls

While immigrants from East Asian communities consistently rank near the top on measures of educational attainment, Southeast Asian immigrants are consistently near the bottom (Ngo & Lee, 2007; Rong & Preissle, 2009). According to the U.S. Census Bureau (2010), 34.3% of Laotian, 38.5% of Cambodian, and 39.6% of Hmong adults over the age of 25 do not have a high school diploma or equivalent. Graduation rates for Cambodians, Laotian or Mien, and Vietnamese are 6%, 7% and 17%, respectively (Niedzwiecki & Duong, 2004). To understand the reasons for the differences in academic success within Southeast Asian communities, researchers have cited complex linguistic, academic, social, cultural, and contextual factors (Uy, 2008; Lee & Ngo, 2005). Many of these immigrants attend underfunded inner-city schools (Kim, 2002), have difficulties learning academic English with little support (Uy, 2008) and struggle with acculturation and ethnic identity (Nagasawa, Qjan, & Wong, 2001). Further, Southeast Asians also suffer from higher rates of poverty than other Asian American groups, including highs of 29.3% for Cambodians and 37.6% for Hmong respectively (Niedzwiecki & Duong, 2004). Delinquency rates for Southeast Asians have continued to rise dramatically, and reports indicate that arrests for some Southeast Asian groups have increased even as these rates have decreased for other minority groups like African Americans (National Council on Crime and Delinquency, 2001).

For Southeast Asian immigrant girls, educational attainment is further complicated by demands to serve the home and family. Research on Southeast Asian immigrant communities, for example, suggests that “adults view the upholding of traditional gender norms to be central to the maintenance of their ethnic identities” (Lee & Kumashiro, 2005, p.7). Moreover, researchers have argued that the immigrant experience for women differs greatly from men (Lee & Kumashiro, 2005) and thus for girls from boys. With expectations for daughters to honor cultural traditions, immigrant girls feel the pressure to obey their parents often at the expense of their own educational aspirations (Lee, 2005; Ngo, 2013). They also take on more responsibilities for the family by serving as translators for parents, cooking and maintaining the home, and caring for younger siblings (Lee & Kumashiro, 2005) while receiving little academic support (Uy, 2008). Fear of assimilation often results in inequitable parental restrictions on the time and independence if immigrant girls which can ultimately affect how girls engage school and with extracurricular activities (Lee, 1997; Lee & Kumashiro, 2005). In some communities, marrying and motherhood at a young age is also often encouraged- a practice that has a negative impact on educational attainment, particularly for Hmong refugee students (Lee, 1996; Ngo, 2013; Smith-Heafner, 1998). Gender expectations for girls in some Southeast Asian immigrant communities often hinder their educational experiences and confound their opportunities for success (Lee, 2005; Lee & Kumashiro, 2005).

This project is particularly important as it is contextualized in Charlotte, a large urban center in the South where conversations of race have centered around a Black-White binary. With Latino immigrants continuing to change the racial landscape of this region, the challenges and struggles faced by the Southeast Asian community continue to remain unnoticed (Dávila, 2013). This one-year qualitative study will focus on adolescent girls from Southeast Asian communities within Charlotte, specifically those participating in the SEAC Youth Program to achieve two main goals or objectives: 1) To examine and document the experiences of Southeast Asian immigrant girls with limited formal education as they negotiate language, race, gender and culture and school within the racialized urban context, and 2) To evaluate the impact of community outreach efforts, specifically the SEAC Youth program, on the educational engagement and success of immigrant girls from within Southeast Asian communities.

We anticipate that data from this project will reveal the ways in which these girls navigate systems of social and cultural expectations that have historically positioned them in the margins in their pursuits for education. This study aims to focus on a critically important and under-researched community of color in Charlotte, using both qualitative and quantitative data to understand the depth of their experiences. In addition, the researchers will be able to identify the impact (if any) of one community-based youth tutoring program in supporting the education of Southeast Asian youth in Charlotte. Results from the project have the potential to raise awareness of complex issues that these immigrant youth face as they navigate educational, social, and educational systems as members from the Charlotte community. Lastly, this project will give voice to a generation of Southeast Asian girls as a way to empower and validate their lives and experiences to inform educational policy.

The labor market continues to recover from the Great Recession with the unemployment rate peaking at 11.8 percent in February 2010 in Mecklenburg County despite the recent recession officially ending in June 2009 (National Bureau of Economic Research 2010). With the current context, how have women fared in terms of full-time employment, wages, and job loss compared to men and how do these differences compare across sectors? In addition, what are women’s barriers to employment and what job skills are needed? This project addresses these questions and builds upon the work of the Women + Girls Research Alliance (Campbell 2007, 2013; UNC Charlotte Urban Institute 2011a, 2011b, 2011c) by updating existing reports by examining employment, wages, and job loss in Mecklenburg County overtime from 2003 to 2013 using the Current Population Survey, the government survey usually used for labor force outcomes in the U.S. Since the consequences of gender disparity in employment have been established (Campbell 2007, 2013), this project will focus on: 1) why these differences exist—do men and women cite different reasons for being unemployed, part-time, or unable to look for work?—and 2) how to address the disparity through an examination of gender differences in utilization of Charlotte Works’ services and insights from focus groups. This project will also build upon work on the gender gap across industries (UNC Charlotte 2011c), by exploring potential sector differences to see if government, nonprofit, or for-profit employers are closer to reaching gender equality in the workplace.

We supported the work of Dr. Qingfang Wang, who conducts research on the challenges facing immigrant female entrepreneurs in Charlotte and whose work was featured in the 2014 Report on the Women + Girls Research Alliance, funded by the Charlotte Mecklenburg Community Foundation. The use of the funds allowed Dr. Wang to extend her research, continue data analysis, and prepare a manuscript for dissemination of her research. Specifically, Dr. Wang used the funds to hire a graduate assistant who reviewed additional literature and examined the new American community survey data.

While many local and regional governments have added programs to promote entrepreneurship, women’s entrepreneurship has seldom drawn sufficient attention. The undermined perception of these businesses not only reinforces socioeconomic injustice related to women’s subservient position in the labor market, but also detracts from current economic revitalization efforts at a variety of scales. Through in-depth interviews and focus group discussions that are informed from research at multiple stages, this study is to theorize and empirically delineate the connections between women entrepreneurs and their communities through the lenses of entrepreneurship. We find that, from the initial creation of these businesses, to their daily operation, to the individual achievement of professional goals, women entrepreneurs are closely connected to local places through their business activities.  This connection reinforces and is reinforced by women entrepreneurs’ contribution to their local communities. Furthermore, race, ethnicity, and immigration have amplified and complicated the connection between women entrepreneurship and place. The interactive two-way connections between women businesses and their communities are seldom examined, nor have they been incorporated into community development policies and practices. Perhaps, more importantly than the creation of a particular manuscript for dissemination, however, is Dr. Wang’s deeper findings.  She says, “Bridging the “place-based” and “people-based” views in alleviating poverty and socioeconomic inequality suggests strategies by which to examine the diversity and fluidity of entrepreneurial process, and, with this knowledge, the possibility to empower disadvantaged groups and enhance the innovative potential of resident entrepreneurs as fundamental engines of economic growth.”

Funding from the Women + Girls Alliance will allow CHARP to expand the scope of the project from technical assistance to rigorous research. For more information about this project, please see CHARP's website.